It’s overwhelmingly clear from ancient art, archeology, and primary sources that the Romans loved their wine. They produced a wide variety of different types, all of varying quality and with totally different flavors. Sometimes wines were even given more flavor by adding spicing and other seasoning. Let’s explore how this classical beverage was prepared, and what we know about it’s taste.

The Romans started making wine in the second century BC. They produced different types of wine, mostly on big estates. Many of these wines are known by name. Two of the most famous examples came from Campania and were called falernum and caecubum. A lot has been written about them, and from these descriptions we know that they had a dark yellow colour, so oxygen was probably involved. This gave them an aged, nutty, oxidative flavor and they were very sweet, as ancient authors describe. They can be compared with modern-day dessert wines like madeira and vin santo.

During the historical cooking week in Provence we visit the Roman winery Mas de Tourelles and we will taste all their Roman wines.

Roman flavors due to the winemaking process

We also know what other wines tasted like because of what was added during the winemaking process. This was not specifically done for flavor, but for preservation, or to improve the wine.

Roasted salt or seawater was added to clarify the wine, for example, as is described by Lucius Junius Moderatus Columella (4-70 AD) in his De re rustica. To our palette, this gives the wine a very strange taste. This flavor can be found today in a wine called Turriculae from Mas de Tourelles in Provence, France. This winery has recreated a few types of Roman wine by using a reconstruction of a roman wine press and let the grape juice ferment in big dolia (earthenware jars). For one of their other Roman wines, they even add quinces. Adding fruit during the winemaking process is also described by Roman authors, as is the addition of herbs. 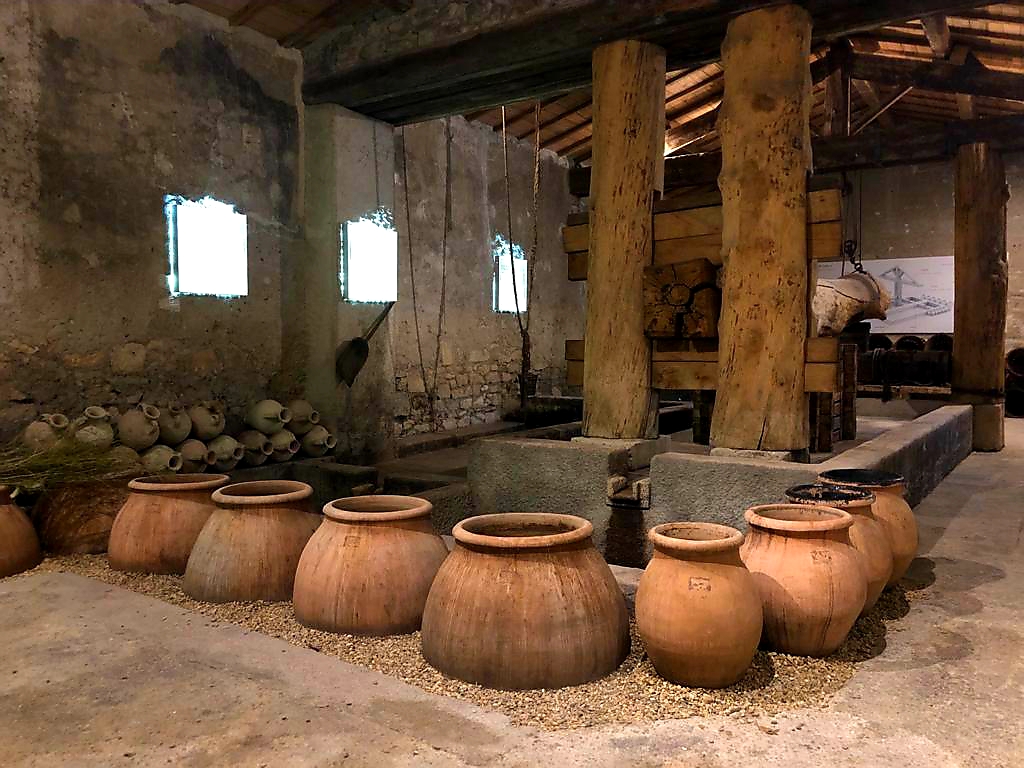 Another interesting additive that Columella described extensively, added on the third day of the fermentation process, was defrutum. This was a strongly reduced grape must. He also tells us how to make defrutum. It was an important additive used to create more alcohol, acidity and residual sugar. Thus, the wine became sweet. Defrutum was used a lot for cooking as well.

The most famous Roman wines that we know of today are spiced wines, such as mulsum and conditum. These were wines that were flavored after the winemaking process. In the Roman cookbook De re coquinaria (first century AD) there are some recipes for spiced wines. From other authors we know what was added: they sweetened their beloved drink with honey and dried fruits such as dates and figs. The wine’s spiciness came from pepper, ginger, and mastic, and a herbal flavor was given by dried or fresh herbs such as thyme. Even seeds such as cumin, coriander, fennel and caraway were added.

One of these spiced wines, mulsum, must have been truly wonderful, for Pliny the Elder (23/24-79 AD) said it was ideal to preserve youthfulness. It was also very handy for good bowel movements, and, after drinking a cup of this ‘medicine’, your windiness would disappear. There wasn’t just one recipe or flavor for this wine; you could add whatever you liked. It was certainly sweet however, because honey was added.

My favorite spiced wine is conditum paradoxum or “surprise spiced wine”. There are only a few recipes from the Roman period which give us precise proportions; conditum is one of them. It is the very first recipe in the Roman cookbook of Apicius. This recipe calls for 11 litres of wine, 5 kilos of honey, 120 grams of crushed peppercorns, 10 grams of mastic, 4,5 grams of saffron, 4,5 grams of aromatic leaves, and 5 dates. Well, that is very sweet and very spicy!

One reason the conditum paradoxum was called “special” could have been the addition of different types of herbs and spices. These gave the wine a special taste, for sure. For example, mastic was used. This is the resin of the mastic tree that grows on the Greek island of Chios, and gives the wine a very special and surprising taste. Adding mastic to wines was something that also was done in Greek antiquity.

Apicius gives us another recipe for conditum: conditum viatorium. This ancient drink was a kind of concentrated mixture of herbs and honey that was added to a wine. You can compare it to a syrup, which you dilute to make a drink. Handy for when you were traveling! Viatorium means ‘travellers’. 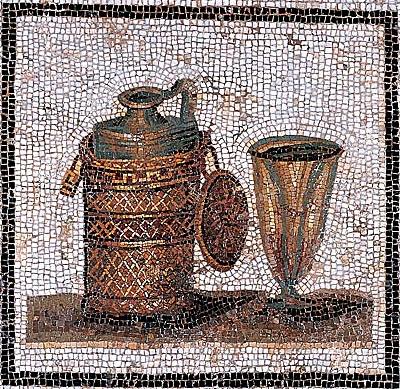 Over the years, I’ve experimented a lot with the ingredients in this wine. I finally came up with the recipe below. When the conditum is freshly made, it is sharp and peppery from the pepper and the mastic. When you leave it for a few weeks (I admit, that is a challenge, so make more!!) the flavor becomes less sweet and sharp and more aromatic.

Preparation
Poor a small glass of the white wine into a pan. Crush the peppercorns or long peppers using a mortar and pestle. Cut the dates in little pieces. Add pepper and dates to the wine. Add the bay leaf, mastic, saffron, and honey. Bring the wine to a boil. It will begin to foam.

Simmer for a few minutes, until the mastic melts. Turn off the heat and let the mixture cool. Add the remaining wine. Cover the wine and leave overnight.

Sift the wine through a cloth, preferably twice. Poor it into a clean bottle and cool. Drink the wine chilled. Enjoy!