Last July The Lower German Limes was added to the Unesco World Heritage List. What was eaten exactly along the limes, the northern border of the Roman empire? I followed a trail of crumbs and present to you a Roman bread from Germania Inferior.

With the arrival of the Romans in the Netherlands in the first century BC, our diet and daily bread changed drastically and forever. The Roman army settled in various fortresses along the Limes Germanicus, the northern border of the Roman Empire that ran right through the Netherlands. Camp villages with craftsmen and merchants rose around these fortresses and large cities were founded. In Germania Inferior an exchange of cultures, eating habits and ingredients took place. For the first time in our history, new ingredients were introduced. A society emerged in which people were no longer self-sufficient and many mouths had to be fed. Bread played a central role.

Cereals were the most important staple in the ancient world. In the south of the Netherlands, grain merchants and large country villas (villae rusticae) on the fertile loess soils provided the production, trade and supply of the necessary cereals to feed soldiers, camp villagers and city dwellers. Enormous grain fields must have been located around the Roman villa Voerendaal-Ten Hove, where a large threshing floor in the courtyard and a grain storage room of no less than 380 square meters was found. Although Dutch grain production (especially spelt) was huge, it was insufficient to feed everybody. Grain was therefore also imported from abroad. 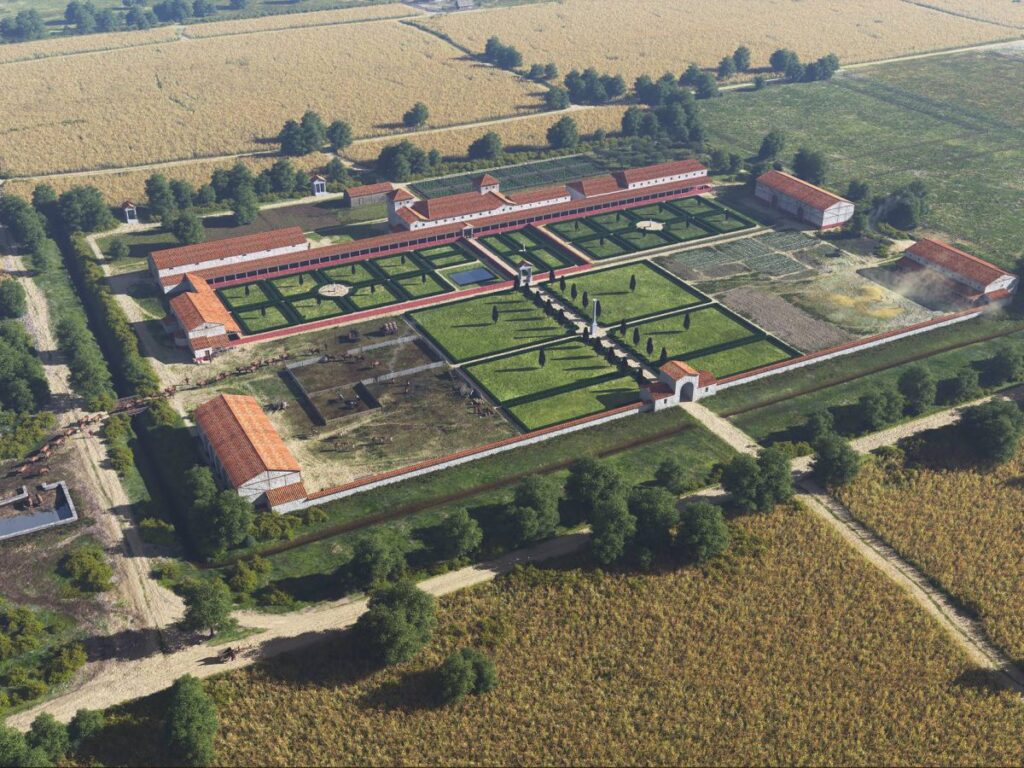 In the Dutch city Woerden, pieces of a grain ship that sunk at the end of the second century remain. The ship, some 30 meters long, was loaded with emmer wheat from northern France. The gravestone of Marcus Liberius Victor proves that grain traders outside the present-day Netherlands were active in our region:

To the mother goddesses, the Mopates, to himself, Marcus Liberius Victor, member of the Nervian family, grain merchant, gladly fulfilled his vow and with good reason. 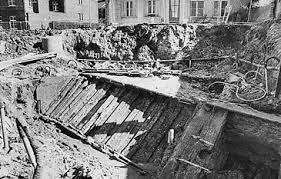 In cities, most households did not have their own kitchen and certainly no oven. Most of the townspeople and residents of the camp villages bought their bread from bakeries. These were usually production companies with a grain mill, bakery and shop in one. The grinding was done in grain mills powered by slaves, donkeys or horses. In the southern Dutch city Heerlen, grinding stones were found next to the bath house, which probably belonged to a water mill that was powered by the bath house’s waste water. Roman grinding stones have been found at many excavations in the Netherlands.

In Roman fortresses along the limes, soldiers lived with eight men in a barrack and had to provide their own food. They received about 800 to 1000 grams of grain per person per day. With thousands of soldiers in a camp, a lot of grain was needed. Granaries were built in fortresses, like at the Kops Plateau in Nijmegen. Soldiers had to grind grain and bake bread themselves. They had their own cooking place where flatbreads could be baked. Bread ovens were located along the inner walls of the fort. In the Netherlands, a clay oven has been found just inside the camp’s walls of the Roman marching camp in Ermelo. 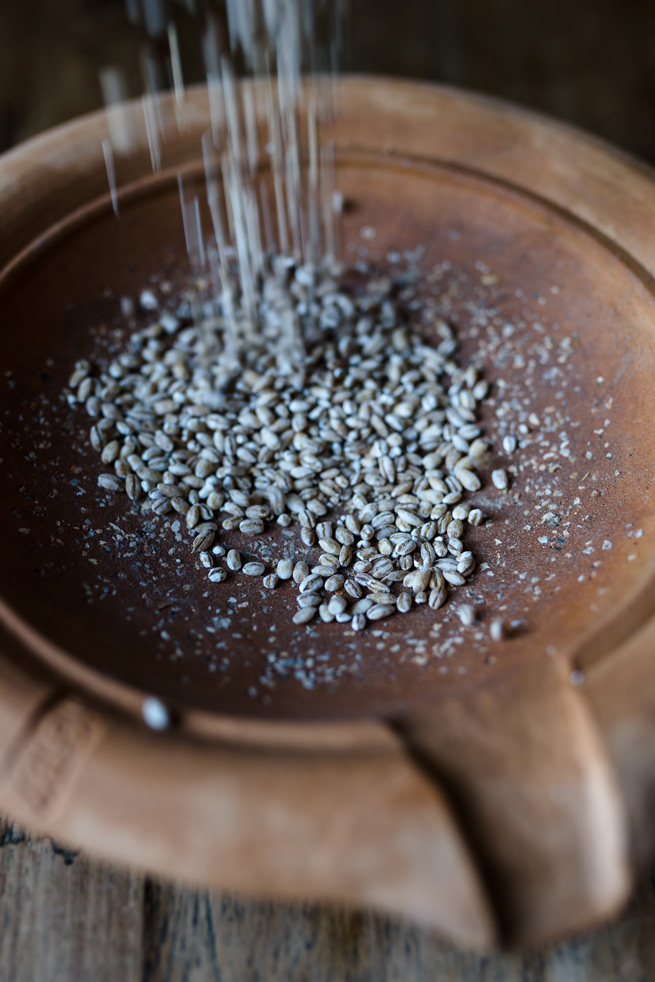 Pliny the Elder (23-79 AD) mentions the making and use of sourdough in his Naturalis Historia. He also tells us something about how bread rises in the northern provinces of the empire:

In Gaul and Spain, where they make a drink by soaking grain… they use the foam that collects on the surface as a leavening agent. Hence the bread in those countries is lighter than elsewhere.

Pliny describes the making of beer, and the leavening agent he mentions is brewer’s yeast. It bakes nice, fluffy loaves, he says. It does indeed. Both sourdough and brewer’s yeast were known in the northern region in ancient times. In the Netherlands we have our own piece of charred “Pompeian” bread. In the temple of Westeraam in Elst, chunks of charred leavened bread, probably made of emmer wheat and/or barley, were found.

This trail of crumbs of information gives us an idea of which types of bread were eaten 2000 years ago in the Netherlands. The large-scale cultivation of spelt and the import of bread wheat suggest a preference for leavened bread, made with sourdough or brewer’s yeast. I have therefore attempted to reconstruct a Roman bread from Germania Inferior for you. 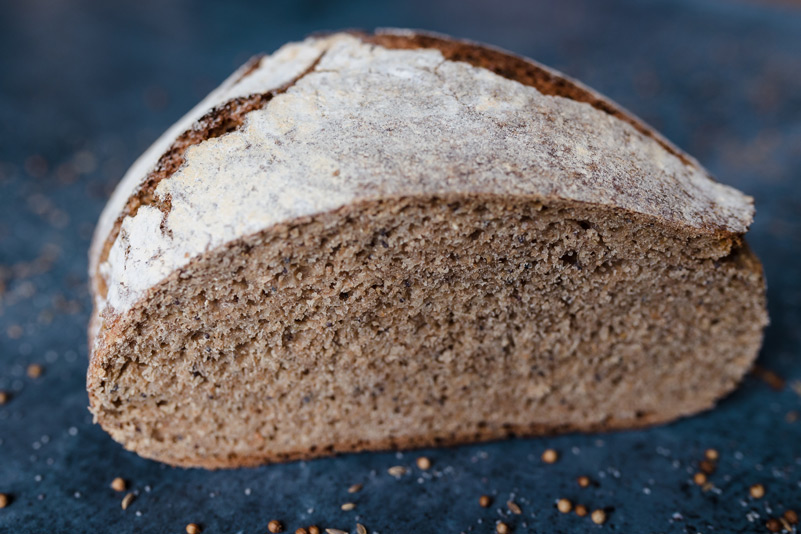 *Do you prefer yeast over sourdough? Instead of the sourdough you can use:
– 7 g dried yeast
– 325-350 ml tepid water (instead of 300 ml water)
And follow the instruction for YEAST instead of SOURDOUGH in the preparation below.

Preparation
Put the spelt, emmer and barley flours into a bowl with the sourdough (or yeast), salt and tepid water. Mix well with your hand until the dough comes together. Add coriander seeds, poppy seeds and dill seeds and mix. Turn the dough out of the bowl and knead for about 10 to 15 minutes until smooth.

Preheat the oven to 220C/428F. Put a sheet of parchment paper on a baking tray and carefully drop the bread upside down from the proofing basket on the baking tray. Put the bread into the oven and turn the temperature to 200C/392F. Bake the bread in about 30 minutes until done and brown.

Photo’s in this article by Jeroen Savelkouls.