Pliny the Elder (23-79 AD) already knew: “The excellence of the finest kinds of bread depends principally on the goodness of the wheat, and the fineness of the bolter” and “persons who eat sourdough bread are stronger”. Bread was a staple, and producing it was a business in Roman antiquity.

Last week my new cookbook, Historisch Bakboek Brood, with historical bread recipes from over the last 4000 years, was launched. In the book are Roman bread recipes and other breads from antiquity.

When leavened bread spread from Greece to Italy in the second century BC, all hell broke loose. Conservative Romans refused to sink their teeth into the fluffy bread. They swore by unleavened bread and puls (grain porridge). Despite this, sourdough baking quickly became popular and took over from puls as a dietary staple.

Bread was made from various grains in the Roman period, but mainly from spelt and wheat. In Italy, the popular bread wheat triticum aestivum grew poorly. It was widely imported from the Balkans, Sicily, and also from Egypt during the Roman imperial period. Barley, millet, rye and even legumes and rice are also known as bread ingredients. In Southern Europe, oats were seen as a weed and as food fit for animals. But they were on the human menu in Northern Europe. For flavor, oil, lard, butter, grape must, wine, milk and eggs were added to bread. As were seeds such as cumin, pepper, caraway, fennel, sesame and poppy.

In Roman cities, professional bakeries increased in number in the second century BC. Cities had dozens of bakeries where bakers (pistores) sold their fluffy breads to city dwellers. In the small provincial town Pompeii there were about 35! One of these bakeries belonged to Terentius Neo. This baker, and his wife, has been immortalized on a fresco in the house adjacent to his bakery.

Their portrait was visible from the bakery, where staff and slaves could see it during their work. Viewed from the other side, the baker and his wife had a good look on their bakery. The prize of their hard work, and proof of their acquired social status. Isn’t it a special experience to be able to look into the eyes of a proud baker that lived 2000 years ago?

Another baker who speaks to us from history was Marcus Vergilius Eurysaces. His huge burial monument, on the outskirts of the center of Rome, shows that he must have made a fortune with bread making.

The size of the monument may be impressive, but the execution of the structure is even more impressive. It consists of gigantic columns on which a structure, with large circles in it, rests. Above that, a sculptured frieze has been placed all around. It is all purely symbolism. The columns are a symbol for bins, in which the dough was kneaded. The circles symbolize kneading machines. The frieze is worth a stiff neck, from peering up. It shows the bakers trade beautifully.

The sculptured frieze shows scenes in which the quality of the grain is checked, flour is sifted, grain is ground by a grain mill powered by a donkey, state officials record the receipt of the grain, dough is kneaded in a kneading machine powered by a horse, men knead bread, someone puts bread into the oven, men carry large baskets of bread, bread is weighed and bread is taken on its way to hungry mouths.

The breads that came out of the ovens in Roman antiquity, were very diverse in nature. In ancient texts dozens are mentioned, such as oyster bread, mushroom bread, sponge bread, hatred bread, pot bread, cake bread, water bread, camp bread, Cappadocian and Picenian bread, depending on their shape, baking method, ingredients or origin.

The most famous bread from Roman times is PANIS QUADRATUS. We know its name from Athenaeus of Naucratis (second century AD). Its appearance has been frequently depicted on fresco and is known from archaeological finds. It is formed as a wheel. In the bakery of Modestus in Pompeii, 81 charred breads with this form were found! 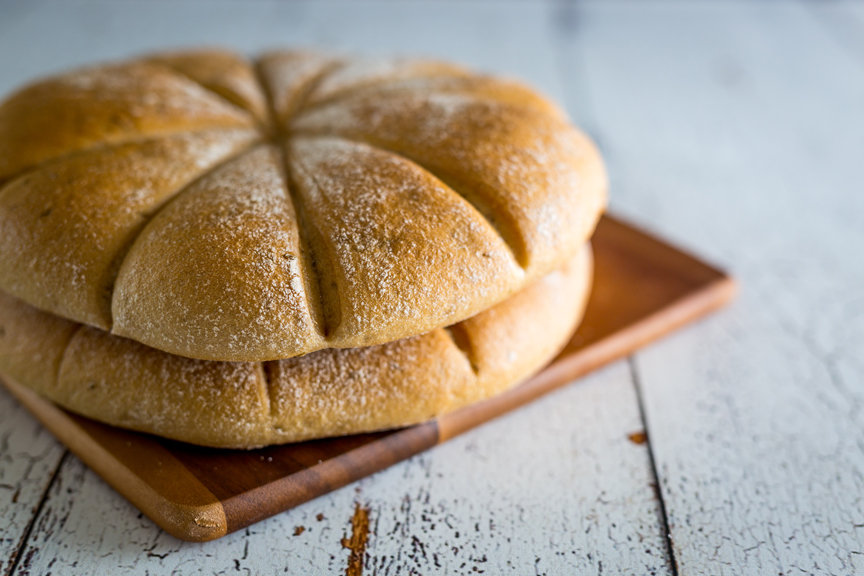 Preparation
Put the spelt flour and wheat flour with the sourdough, salt, water, honey, olive oil and all the seeds in a bowl and knead into a ball of dough. Put this on your bench and knead into a smooth dough in about 10 to 15 minutes.

Preheat the oven to 220 degrees well in advance. Make cuts on top of the bread in the shape of a wheel. Put the bread in the oven and turn the temperature to 200 degrees. Bake the panis quadratus for about 25 minutes.