Every year on the 4th of May, Dutch Second World War Remembrance Day, I give a lecture about cooking and the food situation in the Netherlands during World War II. Unfortunately, this year I was not able to, because of the Covid restrictions. Instead I made an online cooking course about the theme. In this article I tell you something about eating flower bulbs as a wartime food substitute.

I was interviewed by Atlas Obscura about eating tulip bulbs in the Second World War. You can read the article here.

In the winter of 1944-1945, called the hunger winter, there was a great shortage of food and fuel in the western provinces of the Netherlands. Due to the Dutch government’s call for a railway strike in September 1944 and the subsequent shipping ban on the Dutch coast announced by the Germans, the transport of food in the Netherlands came to a standstill. The west of the country became isolated from the areas where most of the food production took place. In the isolated area people had to be inventive with the scarce food resources, and in collecting edible ingredients. In addition to all kinds of ingredients from nature (nuts, berries, herbs, mushrooms, wild vegetables), flower bulbs (tulip and dahlia mostly) and sugar beet were on the table.

The use of tulip bulbs already started in 1941. It was one of the ingredients of coffee surrogate (approved by the Dutch government), along with barley, rye, chicory, green peas and acorns. In this cartoon from the newspaper Haagsche Post from 1941 you can see that tulip bulbs were already used as ‘coffee’. Two tourists are ordering coffee during a trip to see the enormous flower fields (that are still a tourist attraction). The hostess asks: “Do you want coffee from crocus, hyacinth or from real tulip bulbs?” 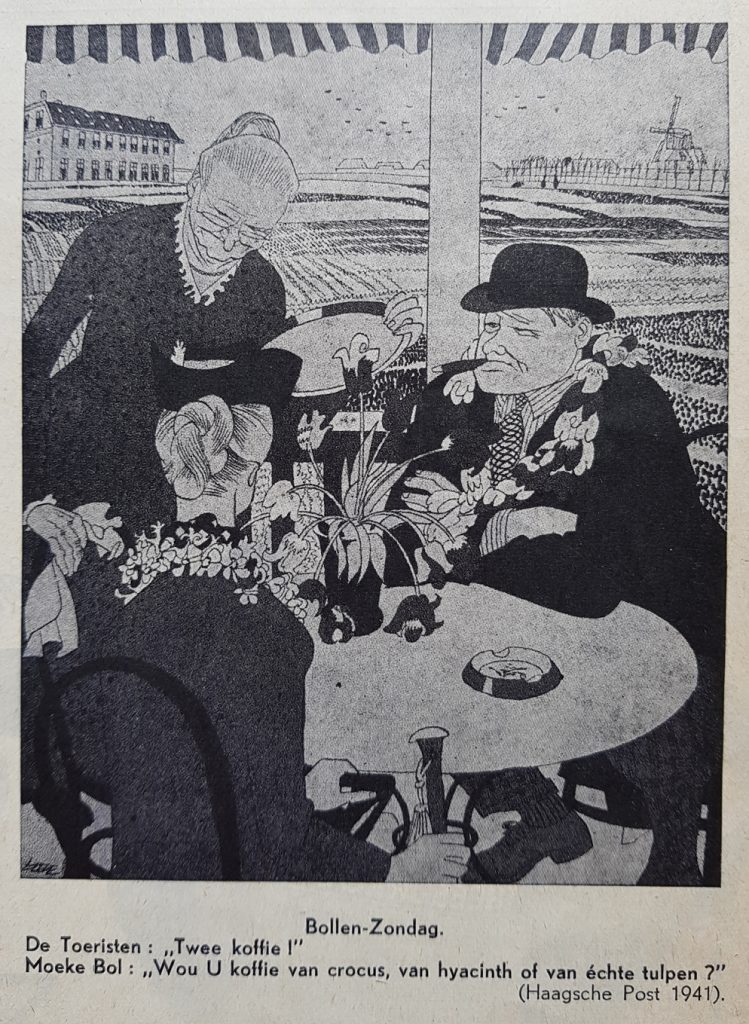 In the hunger winter, flower bulbs were an important ingredient in many meals. Along with potato and a few vegetables like cabbage, it was almost the only food left in cities for the masses. Flower bulbs were boiled, baked, fried and roasted and also processed into soup, stew (mashed with potato), and cookies (grated and baked, such as rösti). A few of these recipes are left, as you can see below. At the time there were almost no ingredients to season the flower bulbs and eating them day after day must have been a horrible experience.

Cookies. Make a batter from 100 grams of grated tulip bulbs, 1 tablespoon of flour, a small onion, herbs and some salt, than you can bake in some oil delicious spicy cookies.

Preparation
To clean tulip bulbs: remove the brown membrane from the bulb and then cut off the top and bottom of the bulb. Cut the bulb in half. Take out the small bitter yellow core and discard. Separate the different layers of the halved balls. Rinse the pieces thoroughly under the tap.

Place the tulip pieces in a small food processor along with the onion, herbs, pepper and salt. Grind the ingredients. Put the mixture in a bowl and add the flour. Now knead the ingredients together with your hands. This is important. Because you don’t use a binding agent, the starch in the bulbs must be released so that everything starts to stick together a bit.

Now form small balls by squeezing a bit of the mixture in your hand and then rolling it into a ball. Flatten the balls into small cookies.

Fry the cookies in a little bit of butter or oil until they are browned on both sides. 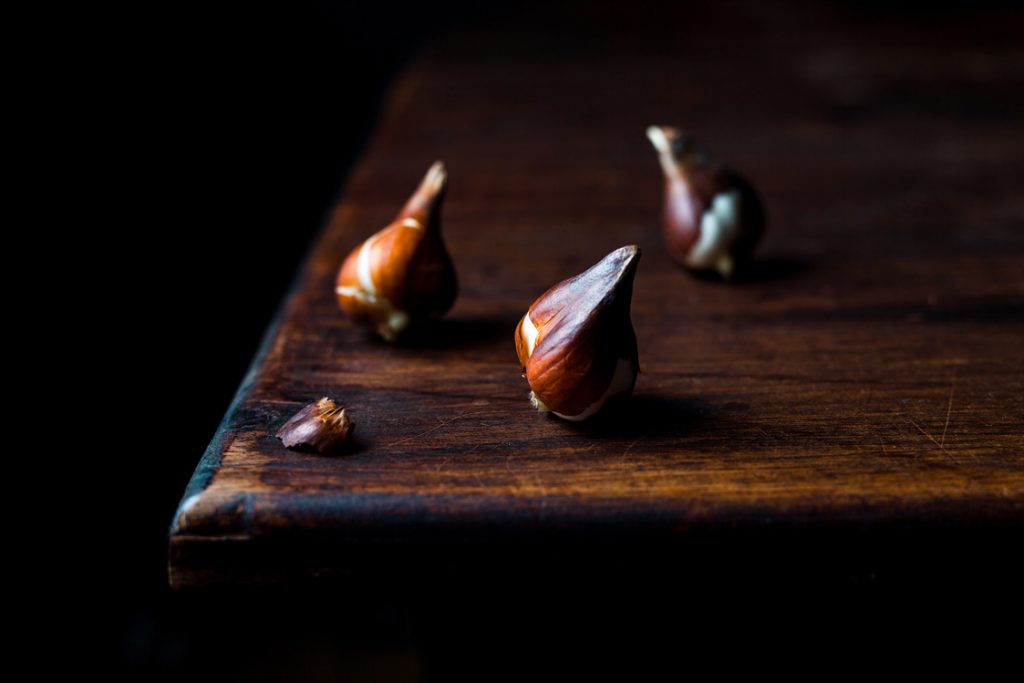 Nowadays, with a few additional seasonings, the bulbs turn out to be a delicious vegetable. They taste a bit like white asparagus, walnuts and chestnuts. Michelin chefs in the Netherlands regularly cook with them.

2000 years ago flower bulbs were a delicacy too: flower bulbs were a real treat in Roman times! Tulips were not known yet, but Romans loved eating lampascioni, the tassel hyacinth. They are still eaten in Puglia, Italy. I use tulip bulbs and lampascioni a lot in my historical cooking classes, when they are in season (September-January). We make lovely dishes from antiquity with them. The Roman recipe below puts the ‘war vegetable’ in a different perspective and shows how tasty a flower bulb can be. The recipe is from my Roman cookbook.

This recipe I created from a quote of Athenaeus of Naucratis (200 AD):

Look, if you please, at the bulb, and see what lavish expense it requires to have its reputation – cheese, honey, sesame seed, oil, onion, vinegar, silphium. Taken by itself alone it is poor and bitter.

*Always take organic tulip bulbs, because other bulbs are frequently sprayed with pesticides. The Romans did not yet know tulips, but mainly ate the bulbs of lampascioni, which are family of the hyacinth. Do not confuse them with the common hyacinth, because they are poisonous!

Preparation
Clean the tulip bulbs: remove the brown membrane from the bulb and then cut off the top and bottom of the bulb. Cut the bulb in half. Take out the small bitter yellow core and discard. Separate the different layers of the halved bulbs. Rinse the pieces thoroughly under the tap.

Blanch them for 30 seconds in gently boiling water and then rinse immediately with cold water to prevent them from cooking any further.

Toast the sesame seeds in a frying pan until light brown and let it cool. Chop the shallots very finely. Cut the feta into very small square cubes.

In 2019 I wrote a cookbook with recipes from the Second World War. I collected hundreds of recipes from wartime cookbooks, hand written recipes books, government pamphlets and recipes from families. In my cookbook I present a selection of these recipes which are still very tasty nowadays.

The cookbook tells the story of resilience and creativity in the kitchen during the Second World War. 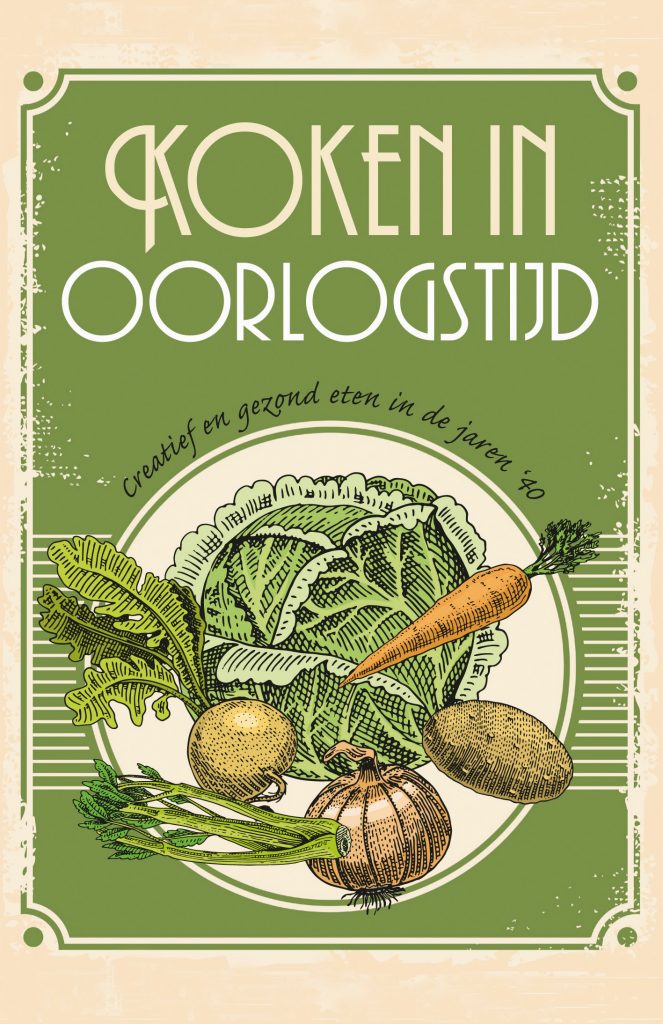